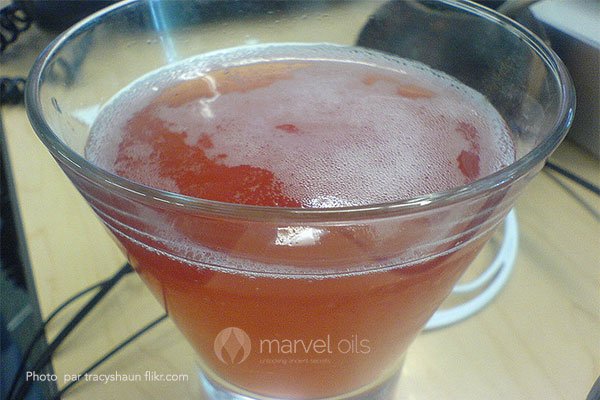 So I finally did it – I got myself a SCOBY to make kombucha tea. This scary sounding name stands for symbiotic culture of bacteria and yeast and I have to tell you it looks just as scary as it sounds. This beige, gelatinous disc is also known by the more poetic name of Manchurian Mushroom, the rather cryptic term zoogleal mat or the off-putting vinegar tea. So now you know.

I was given the scoby by a friend and after following the instructions I had to wait a week to taste my first brew. Truth be told, I was somewhat terrified by the whole affair. When I judged the stuff to be ready, I poured some it into the smallest glass I could find and took the tiniest swig. I half expected to gag, but it was actually rather pleasant. It tastes like mild ginger beer – a bit tangy, a bit tart, a little sweet and slightly effervescent. What surprised me is that I could tell immediately that my body liked it.

After I got over myself, I realised that kombucha tea is so ridiculously easy to make and so healthy, there’s no reason not to do it. Kombucha tea is an inexpensive, natural and delicious way of getting your daily dose of probiotics.

Apart from all the good bacteria it provides, kombucha tea is chock full of enzymes, vitamins (including vitamin C and B), minerals, amino acids and organic acids. It is an ancient health tonic that boosts the immune system, helps with digestion, anti-ageing, detoxification and the production of energy.

This tea has been brewed for at least 2000 years in the east and in China, when a young girl moved out of the family home to get married, she was given a scoby of her own, like an heirloom for good health and longevity.

Follow this recipe to make your own kombucha tea.  I would love to hear how yours turns out so please let me know by leaving a comment below.