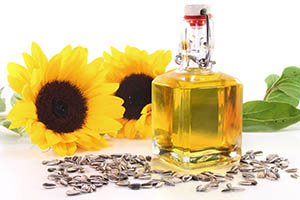 The cheerful and emblematic Sunflower (Helianthus annuus) is one of the most easily recognisable flowers and is grown all over the world. Thousands of years ago it was worshipped by the Aztecs in South America and considered sacred by the native North American Indians who cultivated it as an important source of fat. It is said that the sunflower was domesticated even before corn. Strangely enough, the sunflower became a cash crop in Russia long before being grown commercially in its country of origin, America. It was introduced to Russia by Peter the Great who was charmed by the flowers he found growing in Holland where they were produced for purely ornamental purposes. The tall annual is not particularly fussy about soil type and is quite drought resistant, plus it improves the condition of the soil for subsequent crops.

If the seeds that are extracted from the large head of the sunflower are cold pressed, they yield a fine and nutritionally balanced oil, which is mostly unsaturated linoleic acid, also known as Omega-6. Also present are oleic, palmitic, stearic, palmitoleic, linolenic, arachidic, gadoleic and behenic acids, as well as the sterols campestrol, stigmasterol, beta-sitosterol and lecithin, tocopherols, carotenoids and waxes. Sunflower Oil has more vitamin E than any other vegetable oil. It is clear to amber coloured with a faint odour and a fruity, slightly nutty taste.  As this is mostly polyunsaturated, it is easily oxidized by oxygen and heat. Different varieties produce different fatty acid profiles however and high oleic Sunflower Oil has been bred to contain a minimum of 80% oleic acid, higher than that of Olive Oil, which is much more suitable for cooking. Commercially produced sunflower oil is hydrogenated or partially hydrogenated for longer shelf life, bleached, deodorised and put through benzene derivatives, so is denatured and not suitable for human consumption.

High oleic Sunflower Seed Oil has similar health benefits to Olive Oil. Oleic acid is an omega 9 fatty acid which boosts memory, heart and circulation and inflammation, lowers low-density lipoprotein cholesterol and triglycerides.  It reduces hardening of the arteries and the clogging that leads to clots and heart attacks. The antioxidants and other nutrients in Sunflower Oil make it an anti-inflammatory which helps relieve the symptoms of arthritis and asthma. Sunflower Oil high in linoleic acid benefits inside and out because this fatty acid is required for cell membrane structure.

Sunflower Oil is non-comedogenic, smoothing and soothing for skin, especially dry, damaged, cracked, ageing or allergy prone skin. It is compatible with human sebum and a good moisturiser which protects against infections.

Sunflower Oil is a good base for massage and bath oils and for skin preparations and moisturisers, hair care and sunburn. It is very good as a nappy (diaper) rash preventative and as a remedy for stretch marks. It is suitable for all skin types.

High oleic Sunflower Oil can be heated gently but the regular kind is best used cold. Either way Sunflower Oil blends exceptionally well with other foods.