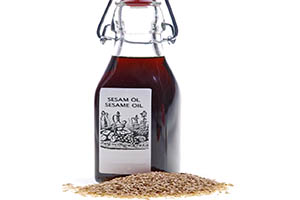 Sesame (Sesamum indicum) is an annual herb originating in Asia and the Middle East, cultivated for over 5000 years for its oil-rich seeds. When the sesame pods reach maturity, they burst open, hence the saying “open sesame.” Inside the pods are dozens of tiny oval shaped seeds that are packed with minerals like manganese, zinc and copper and a host of other nutrients. Sesame seeds are considered a health food and anti-aging therapy and come in a variety of colours from white to yellow, black and red.

Sesame seeds are subject to rancidity but Sesame Oil is amazingly resistant to oxidation. It is roughly 44% linoleic, 40% Oleic, 9% palmitic and 3% stearic acids. The non-fat constituent of Sesame Oil holds an abundance of lignans such as sesamin, sesamol, episesamin, sesaminol and sesamolin. Sesame Oil is highly aromatic and golden to brown in colour. The darker variety is obtained from seeds that are toasted before being pressed and is generally used for culinary purposes.

Consumption of Sesame Oil increases energy, supports endothelial (lining of blood vessels) function and is so health promoting that it is known as the queen of oils. Part of the reason for this is the abundance of lignans in Sesame Oil which are largely responsible for its many and unique properties. Lignans are a major class of phytoestrogens which also act as antioxidants. The main lignans in Sesame Oil, sesamin and sesamolin, are free radical scavengers with neuroprotective qualities.  Additionally, sesamin increases the liver’s ability to detoxify, decreases lipid peroxidation and is anti-hypertensive, anti-inflammatory and anti-allergic. It has also been found to exhibit antidepressant-like effects and to inhibit the proliferation of tumour cells from leukaemia, multiple myeloma, and breast, colon, prostate, pancreas, and lung cancers.

Sesame Oil is an occlusive moisturiser which means that it forms a protective layer on the skin, keeping water inside the upper stratum corneum. It is also an emollient and refattener, improving the lipid content of the skin.

Sesame Oil is the traditional choice for the Ayurvedic practice known as “oil pulling” to prevent or treat tooth decay, halitosis, bleeding gums, gingivitis and dry throat and for strengthening the teeth, gums and jaw. Sesame Oil can be sniffed to overcome chronic sinusitis and allergies, as a gargle to kill strep and as a douche to control vaginal yeast infections. Consumption of Sesame Oil helps prevent hypertension, stroke, cardiovascular disease, high cholesterol and cancer.

Sesame Oil can be used for cooking but as it is fairly expensive and somewhat strong, it is better to use it as a garnish in sauces, dressings, marinades, stir fries and salads. It lends a lovely nutty flavour and undeniably oriental touch to food.

This recipe is from The Complete Book of Coconut Oil