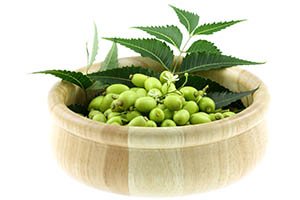 The ancient Neem tree holds a special place in Ayurvedic medicine, appearing in one way or another in 75% of formulations and is said to cure over a hundred diseases. Neem comes from the Sanskrit ‘Nimba’ which means ‘bestower of good health’ and the Vedas called Neem ‘sarva roga nivarini,’ meaning ‘one that cures all ailments and ills.’ The Neem tree or Nim, as it is known in many parts of the world, is native to the Indo-Burma region and is considered to be of divine origin. It is an air purifier, absorbing pollutants and giving off more oxygen than most trees, along with odours that repel insects. Its medicinal use dates back over 5000 years and includes the bark, flowers, seed, oil, stem and leaf.

Neem Oil, otherwise known as Margosa Oil, is pressed from the seed kernels of the tree. It is a very bitter, green to brown coloured oil with an unpleasant odour that has been described as a mixture of garlic and sulphur. The components that give Neem oil its nasty taste and smell are also largely responsible for its medicinal properties. Most of them belong to a class of natural compounds called triterpenes and in the case of Neem Oil, more specifically limonoids. The main ones are azadirachtin, nimbin and salannin but there are 20 more present and others that are still being identified. Neem Oil has a similar fatty acid composition to olive oil with half being oleic, followed by linoleic, palmitic, stearic, arachidic and behenic acids.

Neem oil is a natural first-aid kit for dealing with bacteria, fungi, parasites and viruses on the skin. It is anti-inflammatory, analgesic, antiseptic, germicidal, pesticidal, insecticidal, anti-microbial and antipyretic, active against both gram-positive and gram-negative organisms. An excellent moisturizing oil, it absorbs quickly with good skin penetration and the ability to rejuvenate old, tired skin, so much so that it has earned the name ’Oil of Wonder.’

It is incorporated into toothpaste, hair oils, shampoo, body lotions and mosquito repellents and a lot of natural pet products for the treatment of mange and other skin conditions. Neem Oil’s superior antiseptic qualities make it a good choice for medicinal soaps and pharmaceuticals such as salves and creams.

As Neem Oil safely and effectively repels an incredibly wide variety of pests including the mealy bug, beet armyworm, aphids, the cabbage worm, nematodes and the Japanese beetle, it is finding its way into many products in organic farming. Neem Oil is non-toxic to mammals and birds as well as many beneficial insects like lady birds and bees. Neem oil also controls black spot, powdery mildew, anthracnose and rust.