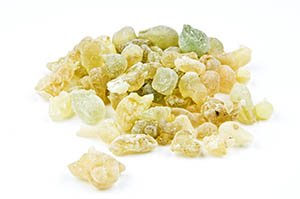 Frankincense, also known as olibanum, is the generic term for the sap collected from various species of the Boswellia tree, native to the Arabian Peninsula, India and northeast Africa. There are about 25 species of tree in the genus, ranging from the squat specimens in the Dhofar region to the tall Indian Frankincense. The name Frankincense comes from the French “franc encens” which denotes high quality incense. Frankincense was once so highly valued that it was worth more than gold.

The trees that produce the sap generally grow in remote and inhospitable places but the merchants who traded this sought after spice grew very wealthy and it is said that Frankincense was to the ancient Arab world what oil is today. Its use goes back at least 5000 years to the ancient Egyptians, Babylonians and Assyrians. It was burned during religious ceremonies, used for medicinal purposes and for perfumery and formed a significant part of the embalming process of Egyptian mummies.  It also features in traditional Chinese and Ayurvedic medicine.

The sap is collected from the tree through a procedure known as striping, where the bark is cut and the resin allowed to bleed out and harden which takes about three months. This is repeated two or three times a year and the ‘tears’ from the final tapping are considered to be the best quality. The dry resin is steam distilled to obtain the essential Frankincense oil which has so far yielded 340 different volatile constituents mostly belonging to the terpene and sesquiterpene families.

Sap forms part of a tree’s immune system, so not surprisingly the incredibly complex Frankincense oil from the hardy Boswellia has been found to exhibit powerful immunostimulant activity. This means it can be considered as a panacea for everything from colds to cancer. Besides the immune-enhancing properties, it is antibiotic, antifungal, antiviral and antiseptic with significant anti-inflammatory effects. It also encourages new cell growth in the skin.

Frankincense oil has been tested against bladder cancer, where it killed cancer cells but left normal cells unharmed, and in invasive breast cancer. It also showed antibiofilm activity in Staphylococcus epidermidis and Staphylococcus aureus which are normally resistant to conventional antibiotics at concentrations that are 1000 times stronger.

Frankincense Oil can inhibit Acetyl cholinesterase. AChE inhibition is used in the treatment of myasthenia gravis, glaucoma and Alzheimer’s disease.

Frankincense can be used on the skin for healing wounds, acne, eczema, boils, scars, stretch marks and inflammation. As an anti ageing oil, it can be used to reduce wrinkles and even out skin tone. As a massage oil, it is good for muscular aches and pains, as well as for arthritis and rheumatism. Added to other essential oils enhances their efficacy. In aromatherapy, it is said to be calming and anti-depressant, used to improve memory and induce deep breathing. Steam inhalation improves headaches, colds, flu, sinusitis and bronchial complaints and acts as a decongestant. A couple of drops under the tongue enhances immunity by increasing white blood cells.