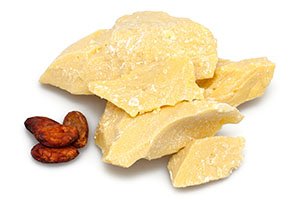 The cocoa tree (Theobroma cacao) is native to the tropical regions in Central and South America. The Aztecs and Mayans used the liqueur derived from the cocoa (or cacao) bean medicinally as a spicy drink and for its aphrodisiac qualities. The beans were also used as a form of currency. The Spaniards took the beans to Europe and from there chocolate from the cacao has become one of the most popular flavours. Cocoa beans are fermented, dried and roasted to produce the cocoa solids (ground up to make cocoa powder) and cocao fat which are then recombined to make chocolate.

Cocoa butter, also known as cacao butter and theobroma oil, is made from the pure cold press oil of the purple cacao bean. It takes 2.5 – 3 kilograms of beans to make a single kilogram of cocoa butter and it is the most expensive fixed oil in the world. High heat extraction destroys the vitamin E content that is found in good quantities in the cold pressed version. Apart from the beta- and gamma- tocopherols, Cocoa Butter has vitamin K, plenty of antioxidants and includes essential fatty acids Omega-6 and -3, as well as the monounsaturated Omega-9 (oleic acid) and stearic acid. Two of the most interesting components of Cacao Butter are anandamine, named after the Sanskrit word ‘ananda’ for bliss and theobromine, a mood elevator.  Raw Cacao is one of the most nutrient rich and complex foods known to man and has been said to be the healthiest food to eat. Cocoa Butter has an equally rich and unique chemical composition that retains a faint taste of chocolate and a delicious chocolaty aroma.

Cacao Butter has been called the ‘ultimate moisturiser’ and is an excellent skin softener. It has a soft velvety feel with natural emollient properties. Due to its high antioxidant profile, it is one of the most stable and highly concentrated fats around. The antioxidants protect skin from free radicals and the premature ageing they cause. Rich and nutritious, it is solid at room temperature but melts at body temperature, forming a protective barrier that locks moisture into the skin.

The anandamine in Cacao Butter is a neurotransmitter that temporarily blocks feelings of pain and depression which explains why it has a calming, bliss inducing effect. Anandamine and is synthesized in the parts of the brain that are involved with memory and higher thought processes. Cocoa Butter also contains cocoa mass polyphenol (CMP,) which slows down the production of IgE, an antibody found in skin, lungs and mucous membranes which is involved in allergic reactions like asthma. When ingested, Cacao Butter lubricates the myelin sheaths of the joints and brain.

Traditionally used as a moisturiser, Cacao Butter is great for dry skin, baby skin, massage and anti-ageing. Cacao Butter is used in luxury soap making and organic lipsticks, lotions, creams, lip balms, hair care products and in suntan formulas. In the pharmaceutical industry, it is often an important ingredient in suppositories due to its body friendly melting point.

Cacao Butter is the most important component in chocolate and confectionery manufacturing. It can used to add richness, taste and aroma to desserts and sweets. It contains the noble essence of cacao and has a calming, bliss inducing effect.