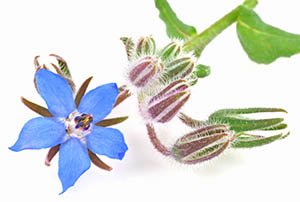 Borage, (borago officinalis) is an annual herb native to the Mediterranean region but now growing almost all over the world. It has exquisite five pointed flowers, most commonly bright blue, which give rise to the alternate name ‘starflower.’ It is a well- known herb that has been recognized and used for over 1500 years. The Roman historian, Pliny, wrote about the many good qualities of borage.

Borage or Starflower Oil is obtained from the seeds of the plant. It is the richest plant source of GLA (gamma-linolenic acid) and also contains the fatty acids palmitic acid, stearic acid, oleic acid, linoleic acid, eicosenoic acid, erucic acid and nervonic acid. The oil is often marketed as “starflower oil” or as a GLA supplement.

The primary benefit of Borage Oil is its GLA content. In healthy individuals, linoleic acid (LA) from the diet is converted into GLA inside the body. GLA is then converted into a group of anti-inflammatory prostaglandins. Prostaglandin 1(PG1) is a key molecule for maintaining healthy skin by quenching inflammation, regulating water loss and protecting skin from injury and damage. Other prostaglandins are responsible for a whole host of biochemical processes including sodium excretion through the kidneys, blood platelet ‘stickiness,’ inflammatory responses and immune function. Several factors prevent the synthesis of these hormone-like substances, such as vitamin and mineral deficiencies and impaired enzyme function which is either hereditary or due to the over consumption of hydrogenated vegetable oils which block the enzymatic conversion of linoleic acid to GLA.. The result is itching, eczema, redness, dry skin, discoloured hair, thin, peeling nails and hormonal problems, to name a few.

Supplementation of GLA through Borage Oil bypasses this enzymatic conversion and can have a profound effect on skin and hair, as well as chronic disease and immune function. Whether Borage Oil is taken orally or applied topically, it restores moisture and smoothness to skin, reducing, damage, roughness, inflammation and the visible effects of ageing. It reduces hair loss and strengthens nails. When applied to the skin, Borage Oil penetrates deeply and becomes available as GLA.

Borage Oil is a superior moisturiser for your skin which can also be used to nourish your eyelashes, eyebrows, cuticles and lips. Applied topically, it is very effective for infantile seborrhoic dermatitis, a common condition in infants otherwise known as ‘cradle cap.’ It improves the appearance and texture of the skin, even in areas where it is not directly applied.