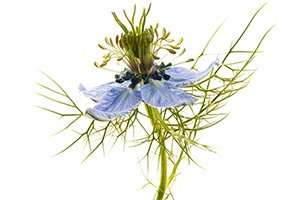 Nigella sativa is an annual herb with delicate pale blue and white flowers that grows to about knee height. Also known as black cumin, black caraway and kalonji, it is native to south and Southeast Asia and the Mediterranean. Nigella Sativa has been widely used for thousands of years for its astounding medicinal properties and culinary delights. The plant produces a number of tiny triangular black seeds with a long history of curative powers. The seeds are odourless until rubbed, when they give off a pungent smell. It is said that a vial of black seed oil was discovered in the tomb of the Egyptian Pharaoh Tutankhamen. Nigella Sativa is widely known throughout the Mediterranean and Islamic World and has been used to treat a variety of ailments for millennia. Probably the most famous reference to nigella sativa is attributed to the Prophet Muhammad (PBUH) who said that the black seed is a cure for “everything except death.”

The seed of Nigella Sativa may be small but it packs a mighty punch which is why it is known as the ‘blessed seed.’ Over 100 active components have been discovered, including: alanine, arginine, ascorbic-acid, asparagine, campesterol, carvone, cymene, cystine, dehydroascorbic-acid, eicosadienoic-acid, glucose, glutamic-acid, glycine, iron, isoleucine, leucine, d-limonene, lipase, lysine, methionine, myristic-acid, nigellin, nigellone, oleic-acid, palmitic-acid, phenylalanine, phytosterols, potassium, beta-sitosterol, alpha-spinasterol, stearic-acid, stigmasterol, tannin, threonine, thymohydroquinone, thymoquinone and tryptophan. It is also a valuable source of protein, carbohydrates, essential fatty acids such as Omega 3 and Omega 6, vitamins A, B1, B2, C and niacin as well as minerals such as calcium, potassium, iron, magnesium, selenium and zinc.

Thymoquinone, found in Black Seed Oil, is one of the most powerful antioxidants known to man. It is also analgesic and anti-inflammatory and helps support the immune system by stimulating the cells that fight against viruses and bacteria. Thus, Black Seed Oil is anti-bacterial, anti-viral and a potent immune stimulant. It is a complex combination of elements that helps the body heal itself.  It is neuroprotective and normalises the secretions of the stomach and pancreas. Black Seed Oil is also an expectorant and antipyretic. It expels kidney stones and is anti-epileptogenic.

Topically, Black Seed Oil is great for hair loss and dandruff when massaged into the scalp. It is also good for acne, pimples, dry skin, psoriasis, eczema and other troublesome skin conditions. When in doubt, use Black Seed Oil.

For culinary uses Black Seed Oil can be used as a seasoning for its aromatic and medicinal qualities.