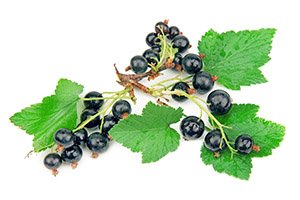 Black Currant Seed oil comes from the seeds of Ribes nigrum, the black currant or blackcurrant bush from Central and Eastern Europe and parts of Asia. The bush was banned from cultivation in the US in the early 1900s until 2003 so is not very well known there. It has, however, been used extensively in the UK since the middle ages for diarrhoea, arthritis, rheumatism and as a diuretic. It was in cultivation in Russia by the 11th century, especially in monastery gardens. In the 18th century, a Professor at La Sorbonne called it the “bush of a thousand virtues.” Black currant is also known as the cassis berry.

The little berry is incredibly rich in vitamin C and other health promoting micronutrients like phenolic compounds, notably anthocyanins and flavanoids.

It is also packed with essential fatty acids such as gamma-linolenic acid or GLA (omega 6) and stearidonic acid or ALA (omega 3,) plus linoleic and linolenic acids. The omega 6:3 ratio is 4:1, optimum for the human body. Although there is an overload of omega 6 in the modern diet, GLA is the essential, naturally occurring ‘good’ kind which works by stimulating the production of anti-inflammatory hormones. It works better when ALA is available.

Black Currant Seed Oil contains nature’s highest concentration of gamma linolenic acids, next to Borage Oil. It helps skin maintain resiliency, seals in natural moisture and has a smoothing, softening and strengthening effect, alleviating itching and irritation. The fatty acids in Blackcurrant Seed Oil have been found to combine with the skin’s own lipids in the stratum corneum which makes up the outermost 5 layers. This section of the epidermis provides a vital protective barrier between the environment and the deeper skin layers.

Black Currant Seed Oil is used medicinally as a supplement for a wide range of problems, especially premenstrual symptoms and in menopause when fluctuating hormones can result in a deficiency of GLA, leading to hot flushes, breast pain, irritability, depression and water retention. It treats auto immune disorders like lupus, inflammatory disorders, joint pain, eczema, psoriasis and other skin problems as well as hair problems, like dry, brittle, thin and split hair and weak, brittle nails. It is a great supplement for healthy vision due to the antioxidants and anthocyanins present in the oil which also help support night vision. One of the most interesting uses of Blackcurrant seed oil is for adrenal support in chronic fatigue syndrome and adrenal burnout. In some countries it is known as homeopathic cortisone. Conventional medicine has no cure for chronic fatigue.

Black Currant Seed Oil is an ingredient in many cosmetics and skin preparations, often in combination with vitamin E. Topically it is used to treat skin disorders, such as atopic dermatitis, eczema and dry, scaly skin and can form part of gargles for sore throats.