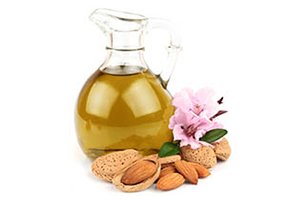 The almond tree (Prunus amygdalus) is native to South Asia and the Middle East but now grows in Europe, Africa and the States. The almond nut isn’t actually a nut at all but the seed of a drupe. Wild almonds are bitter and toxic, containing cyanide, but the domesticated variety are edible. Commercially grown almonds are the sweet variety and as they contain 50% more oil than their more bitter relatives, they are the source of Almond Oil.  Almond Oil has a similar oleic acid (omega-9, mononusaturated) content to olive oil and is fairly heat resistant and stable.

Almond Oil is roughly 68% oleic acid, 25% linoleic acid, 4% palmitic acid and has a tiny amount of palmitoleic acid, stearic acid and trace amounts of arachidic acid. It is also a rich source of vitamin E and contains beta-sitosterol, the vitamins A, B1, B2, B6, minerals like magnesium and calcium, glucosides and protein. It has a neutral taste, a mild, sweet nutty aroma and a pale yellow colour. It is often used as a carrier oil.

Ancient Chinese, Ayurvedic and Greco-Persian schools of medicine used Almond Oil to treat dry skin and conditions like psoriasis and eczema. It is an emollient so it softens skin and a humectant because it prevents moisture loss. It also reduces scarring when massaged into the affected area. Almond Oil has a fine texture with a natural affinity for all skin types so it is easily absorbed and doesn’t leave the skin feeling clogged or greasy, but it is especially good for dry and irritated skin.

Regular consumption of Almond Oil helps reduce cholesterol, nourishes the brain and nervous system and can also enhances endurance. Apart from being a laxative, it has cardiovascular benefits, elevating good cholesterol levels and can aid digestion. The beta-sitosterol in Almond Oil is a phytosterol which has been shown to boost immunity, good for post-operative patients and the stressed. Beta-sitosterol is also anti-viral, antibacterial and antifungal and can relieve inflammation, heal ulcers and alleviate cramping.

Almond Oil can be used as a substitute for olive oil in cooking, salads, marinades, and sauces. It can also be used in frying and baking recipes due to its relatively high smoke point and fresh, neutral taste. It does not require refrigeration.

Almond Oil is probably one of the most widely used oils for massage. It provides great ‘slip’ and can be enhanced with essential oils. It spreads easily and is safe for babies. Almond oil is often added to creams, moisturisers, lotions, ointments, bath oils, makeup, sun care products, soaps and personal and baby care products. It is just as good used on its own as a moisturiser, cleanser and make up remover. It can even reduce those dark rings under the eyes if you apply it on a bit of cotton wool nightly. Neat Almond Oil is very nourishing for the hair. Massage it into your scalp to feed the skin, smooth the hair cuticles and make your tresses shine.

Prepare the cream in small quantities because it does not keep well.

You can possibly freeze pots to preserve the mixture for longer.